The 2020 Provincial Memory Championships are cancelled

Due to the Covid 19 Pandemic, we have decided to suspend the 2020 Provincial Canadian Memory Championships until further notice. Stay home, stay healthy.

Why are we planning to modify the Memory Disciplines? Because we feel that the games can be made much more spectacular and entertaining. Also, the founder of our sport does not seem to appreciate imitators (See our About Tab).

Please, have a look at what we are planning:

Along a wall, or on a table, we will have displays of 52 cards in 4 rows of 13 cards. Contestants will gather at the walls (or tables) and will have 10 minutes to recreate the decks that will either be hanging on the wall (or erected on stands–as in the photos– or laid out with a cover page) onto other nearby recall tables. The first person to finish is the leader. There will be no more separate memo and recall periods thereby simplifying the game. 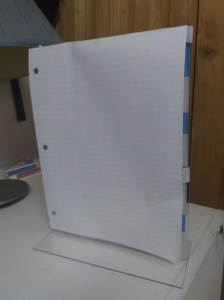 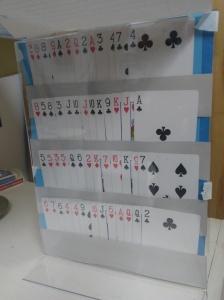 If the contestant isn’t sure about remembering some cards correctly, he or she can leave his/her recall deck on the table and dash back to the memo display and then come back to the table to fix his or her cards. There will always be a paper flap covering the cards that will need to be lifted to prevent contestants from just looking at the memo cards display from the recall table location.

In addition to this, we are planning an optional extra memory test for all those who managed to complete correctly their recall decks (or list of words, numbers, images, faces) in under 10 minutes (or the maximum allowable time) where contestants can earn great bonus and change the preliminary results.

Eligible contestants who wish to participate in the bonus session will be asked to recall 3 random cards–one from each part of the set of data to memorize–  (or words, numbers, images, faces) in under a minute. Get all 3 correctly and your bonus is that your time gets to be divided by 3. Get 2 correctly and your bonus is that your times gets to be split in half. Get only one correct and you keep your original time. Get it all wrong and what ever time you had will be increased to the 10 minutes mark (or the maximum allowable time for the memory discipline)

We feel that having our Memory Disciplines this way will make it much more interesting for the viewers who will be able to see the contestants going back and forth and who is about to finish first. The bonus system could occur on stage right after each one of the memory discipline and be very dramatic.

The penalty system for decks that have errors in them is now finalized and all the details are in the Memory Discipline/ Scoring Tab.

Here are the samples for the new Memory Disciplines of the 2020 Canadian Memory Championships:

1) Random Words (There will be 2 pages of this) 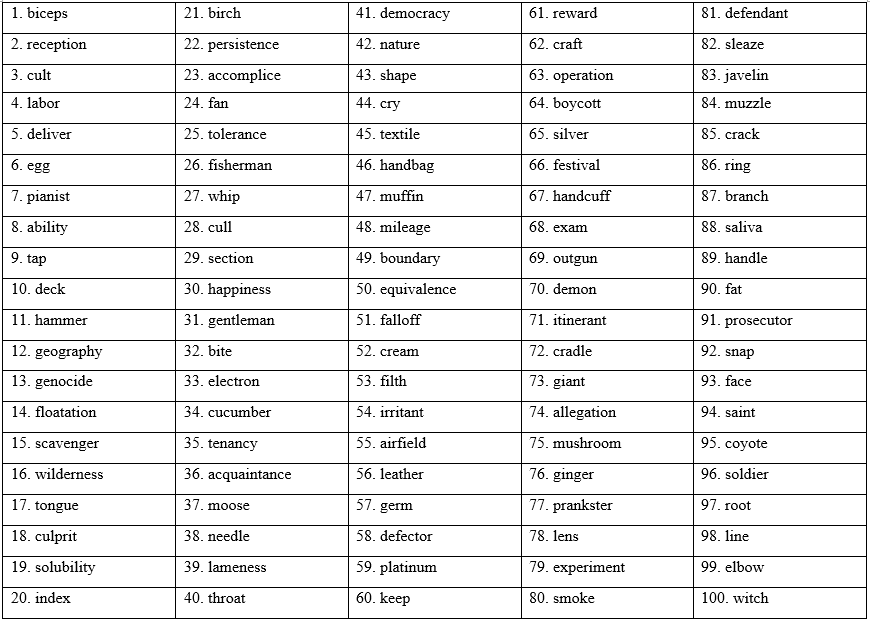 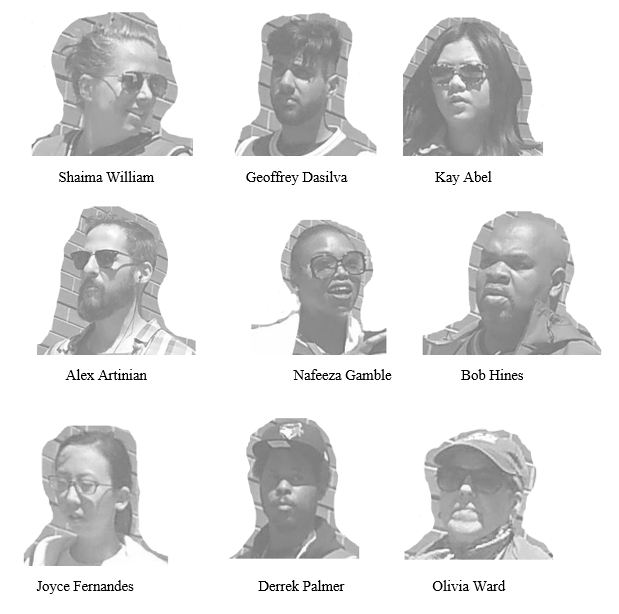 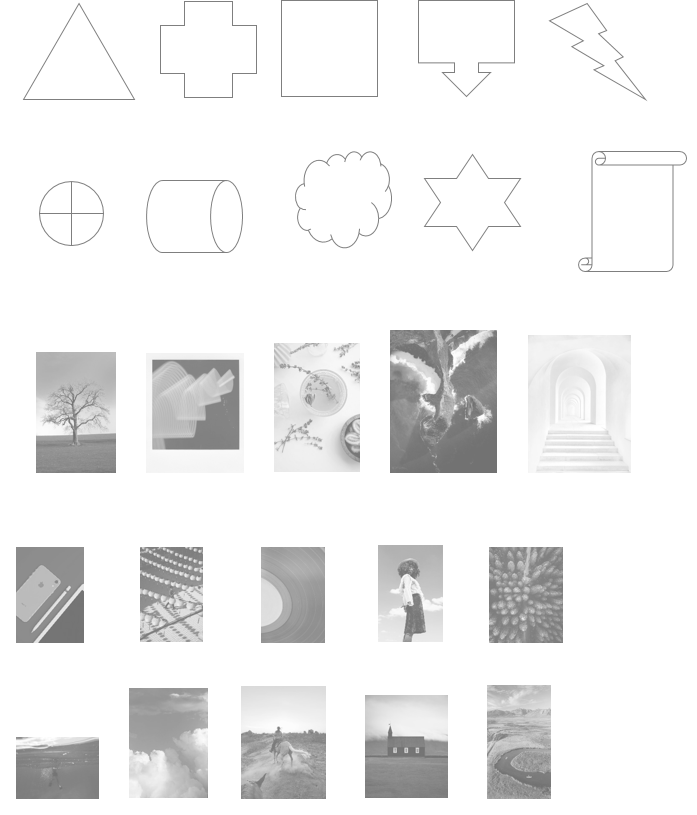 *The Provincial Memory Championships is not be affected by this change this year. 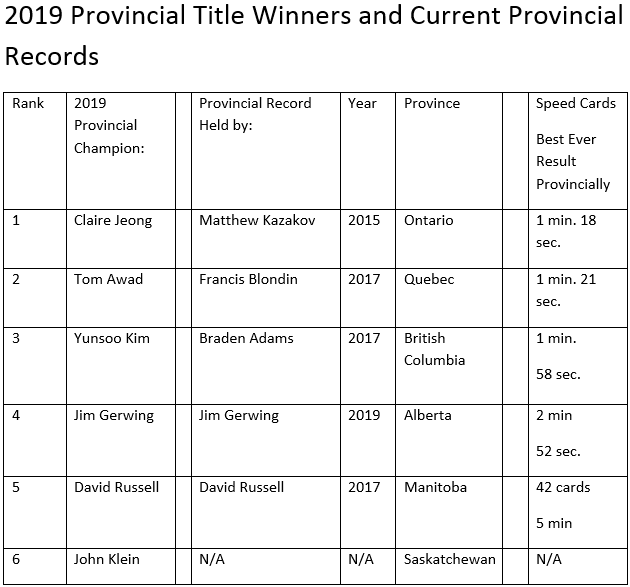 Edmonton comes first and second at the 2019 Canadian Memory Championship

Toronto (GTA) – Sept. 1/2019 – James Gerwing of Edmonton won the 2019 Canadian Memory Championship followed by Devraj Hansdah also of Edmonton. The event took place at the Trireme Academy in Toronto (GTA). In third place was Justin Justin Bimbrahw, a maths teacher in the GTA, who decided to attend when he noticed there would also be a separate math challenge at this competition. At the competition, there was an error in the scoring and the first prize was wrongly awarded to Devraj. The scores posted here reflect the newly adjusted results, a switch between first and second place. 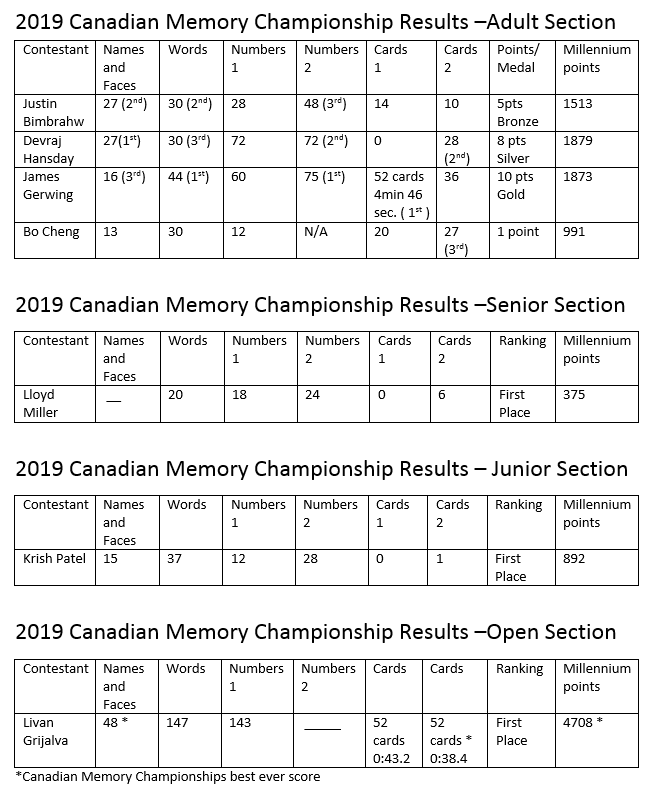 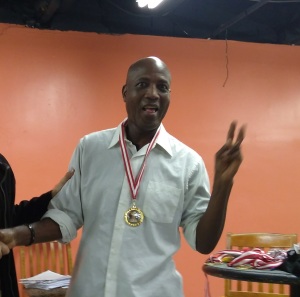 Here is an post-competition interview with Livan Grijava: 2019 Livan interview

Here are the champs busy recalling their decks at Speed Cards: https://we.tl/t-xIvYLAodvM

Check out this after competition chat with the 2019 Canadian Memory Championships Silver Medalist Devraj Hansdah: https://we.tl/t-wlaqCbxfWj

Here’s a greeting of memory competitor Bo Cheng midway to the event https://we.tl/t-FrYOdkn1bI 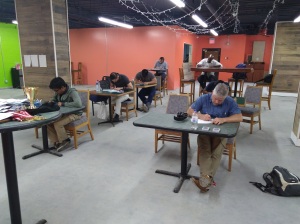 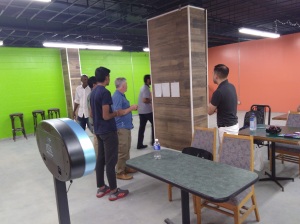 In the mental math championship, open to all, Justin Bimbrahw won Gold with a tie braker win against Tom Awad who was participating from Montreal. Devraj Hansday won Bronze also by winning a tie braker against Lloyd Miller.

To register for this event please fill this form Registration-for-2019-CMC and email it to contact@canadianmemorychampionships.ca

For more information on each memory discipline please check out this link:http://www.canadianmemorychampionships.ca/memory-disciplines/

The 2019 Canadian Memory Championships will take place on Sunday,  September 1 at the Trireme Academy, 1850 Victoria Park.

The registration for this event is now open.

1) Four memory disciplines Names, Numbers, Words and Cards.
2) Sections as usual, such as the Open Section, Junior and Kid Section.
3) The winner of the Toronto event in the Canadian Main section (for adults–but any Canadian can choose to participate in it)  received the title of Canadian Memory Champion.
4) A separate mental math challenge.

Here is how it works: 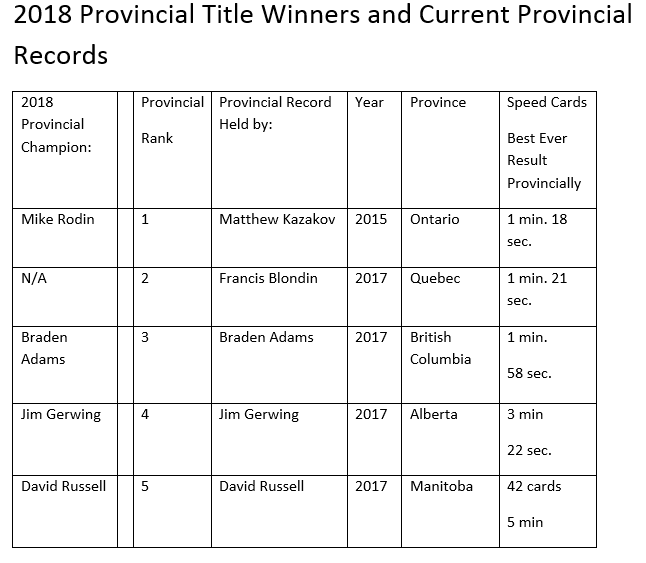 Here are all the winners of this year’s Provincial Memory Championships. New records were established: In Manitoba, David Russell doubled his previous record of 21 cards and in Alberta, Jim Gerwing shaved 11 seconds from his previous record.  Congratulations!

The scores above reflect the best ever results achieved by Canadian Competitors at a Canadian Memory Championship. For more details on how we calculated these points please check this link 2018 Millennium-points-of-the-Canadian-Memory-Championships.

The scores below reflect the best ever results achieved in the Open Section of the Canadian Memory Championships. The points were calculated using the 2018 Millennium-points-of-the-Canadian-Memory-Championships.

In preparation for the 2020 Canadian Memory Championship, we are organizing free memory tutorial club meetings, led by a memory technique expert. This is now a monthly meeting on Saturdays, in a downtown Toronto Library to help people improve their memories. Space is limited. Reserve your seat at contact@canadianmemorychampionships.ca for the Toronto meetings.